In July 1937 Amelia Earhart’s plane vanished somewhere over the southern Pacific in the general vicinity of New Guinea. Neither the plane nor her and her co-pilot’s bodies were found during the massive search operation that followed. But two years after her disappearance scattered skeletal remains, later identified as those of a tall woman of European descent, were found on the (then) desert island of Nikumaroro, one of the possible crash sites of Earhart’ aircraft. The skeleton was far from complete and many bones were missing, and the suspicion immediately fell on coconut crabs, common on the island. They were accused of carrying the bones and squirreling them away. But recently a group of history buffs called TIGHAR came to the crustaceans’ defense, claiming that these animals did not customarily carry away food into their burrows. They even conducted an experiment by placing a pig carcass on the beach of Nikumaroro and recorded a fascinating time lapse video of the crabs stripping it of its flesh. Crucially, though, no bones were carried away by the coconut crabs. But it still showed very convincingly that, had the crabs found Amelia Earhart’s body, they would have eaten her completely in a matter of days. I certainly find this explanation far more compelling and easier to think about than the alternative proposed by the authors of the pig experiment – that her body was eaten not by the crabs but by her starving co-pilot who might have survived the crash. Why the hell would he ever resort to cannibalism on an island full of large, delicious crustaceans and coconuts? (And what happened to him? Two years after the crash people arrived on the island and, if movies are any indication, they should have found a muscular demigod who had a meaningful relationship with a volleyball.)

These thoughts ran through my head as I squeezed it into holes in the rugged karst rocks of Vamizi, an island off the coast of northern Mozambique, looking for coconut crabs. Their burrows turned out to be full of coconut shells and other food remains, indicating that a single experiment good science makes not. I had been dreaming of visiting Vamizi ever since my friend Harith showed me a cell phone photo of himself on the island, holding two coconut crabs. All my life I had been fascinated with those magnificent creatures, the largest, heaviest, most awesome of invertebrates that grace the terrestrial surface of the planet. Some years ago I was lucky enough to see these animals alive, first on Guadalcanal, later on Japan’s Okinawa Island, but in both cases they were individuals already captured by somebody else. In those places coconut crabs are on the brink of disappearance due to habitat loss and overharvesting, and I never had a chance to observe them in their natural habitat. Vamizi, however, a tiny speck of paradise in the Quirimbas Archipelago, still appears to have a healthy population of these animals.

Coconut crabs survive on Vamizi thanks to a clever campaign developed by the good people of the Vamizi Marine Conservation Research Centre. If, they say to the locals who traditionally used to hunt the crabs, you kill one, a terrible spell will never let you leave the island. In a country that is full of many colorful myths, this scary thought has apparently kept many from falling to the temptation of the coconut crab’s meat. How many crabs survive on the island is unknown but apparently during the wet season it is possible to see a dozen or more coconut crabs on a single stroll through the coastal woodland.

I arrived on Vamizi in June, during the cool, dry season, and the locals were not too optimistic about my chances of finding one. (“They sleep now.”) But I didn’t fly to northern Mozambique on the thieving (camera gear was stolen from our checked-in luggage) and occasionally suicidal LAM airlines (go ahead, google it) to leave without seeing a coconut crab. According to Harith the best chance of finding one would be at a place that reliably provides the crabs with their favorite food. No, not coconuts. They prefer something else – fresh garbage.

“Take me to the dump”, I asked Harith as soon as it started getting dark. As we approached the island’s refuse disposal site we heard a sound that I would have never associated with coconut crabs – loud clicking of empty bottles. And there they were. Two giant, surprisingly colorful animals, moving among a big pile of glass, looking for edible bits of organic matter. The setting was not natural, it certainly wasn’t beautiful, but I almost choked up when I saw them. It was at the same time a fulfillment of a life-long dream, to see coconut crabs in the wild, and a sad, disappointing realization that “wild” is a big pile of junk and rubbish, reeking of rotten food and overrun by rats. The Anthropocene, in its full splendor and glory.

Over the next few days my outlook had improved as I counted and photographed the crabs, looking for an indication that the population was breeding on the island. A large part of the island is a well-protected nature reserve, full of gorgeous tropical life, including thousands of land crustaceans, small mammals, breathtaking birds, and cool reptiles (including two species new to science, which Harith will soon be describing.) And I won’t even mention the marine life, which puts Vamizi at the top of the list of the most spectacular diving sites of the world. The most reliable proof of the crabs breeding there would have been finding juveniles still in their shells. Coconut crabs (Birgus latro) are oversized, fully terrestrial hermit crabs, that, just like other members of the hermit crab family Coenobitidae, develop as microscopic planktonic larvae in the ocean, and must don an empty snail shell during the first months of their life on land to protect the still soft and fragile abdomen. Only after reaching the size of about 10 mm do they abandon the shell and assume the symmetrical appearance that differentiates them from other hermits (in all other species the abdomen remains asymmetrically twisted throughout their life.)

I must have picked up and examined about a thousand hermit crabs but, alas, they all turned out to be one of the two local species of Coenobita. A trip to a coconut grove at the opposite end of the island to look for juveniles hiding in the fallen fronds and coconut husks underneath the palm trees was similarly fruitless. That was worrisome. Rats are known to kill juvenile coconut crabs and the island was full of them. We saw rats not only around the houses but also in the most remote, virtually unspoiled natural habitats of Vamizi. One night my friend Max was startled by a gecko that hurled itself towards his head from the very top of a tall tree to escape a rat chasing it on the thin branches. Adult coconut crabs can and will kill a rat, but younger ones don’t stand a chance. Thankfully, the tourism company &Beyond, which operates the phenomenal eco-resort on the island, has been working diligently to improve the situation. To remove invasive species from Vamizi without harming its native populations of samango monkeys and other small mammals they use specially designed rat-only traps, ultrasonic repellents, and other tools to get rid of the nasty aliens.

Every night I spent hours looking for juvenile crabs along the paths in the forest but all I was seeing were very mature adults. On the last night, dispirited by not finding any proof of new blood in the population, I walked further than usual and ended up being out in the field well past 2 AM. Tired and despondent, I decided to have one last tour of the resort staff houses, the most reliable spot for finding coconut crabs at that time of year. There were a few adults milling around but they soon left for their burrows in the forest. That was it. During my four days on the island I did not see any evidence that the animals were breeding. A similar pattern has been seen in other places inhabited by coconut crabs, where the pressure from invasive species, overharvesting, and habitat loss either prevents the animals from breeding or leads to unnaturally high mortality of juveniles. Despite coconut crabs’ longevity (they can live to be 60), with no young crabs surviving the population eventually dies out.

I swept the light of my headlamp around, noticing for the first time the fence at the far end of the compound, overgrown with tall, spiky weeds. It occurred to me that I had never checked what lived among them. If I were a young coconut crab, would I want to compete with the adults, and risk being eaten, by feeding at the same spot, at the same time of night? I climbed the fence and crawled through the thicket, long, thorny branches ripping my shirt and cutting my skin. The ground below the weeds was covered with Coenobita hermit crabs, frantically gorging on discarded scraps of food. And there, among the hermits, were the juvenile coconut crabs. They weren’t much bigger than the large hermit crabs C. brevimanus common on the island, about 5-7 cm long. I let out a sigh of relief. The presence of young coconut crabs made it clear that the population was thriving, or at least not dying out. And the help they get from the conservation group working on the island will certainly improve their chances.

The next morning Harith, Max, and I left the island, having learned not only that it had a good population of coconut crabs, but also that eating oysters directly off the sun baked rocks exposed by the low tide really helps you purge your digestive system. I hope to go back to Vamizi sometime soon and do a more thorough assessment of the crabs’ population. And if I ever perish somewhere near to where these gorgeous animals live, I hope that they find me. 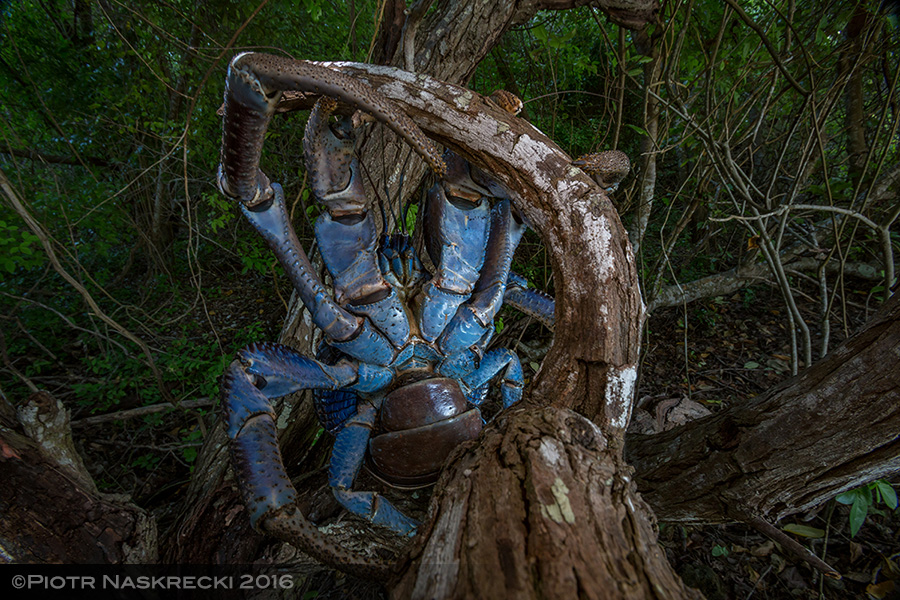 The underside of a blue coconut crab.